Today I am going to help you with how you can collect .NET Profiler Trace in Azure App Service. With out any further details we will jump in below details.

The Diagnostic Tools options under the Diagnose and Solve blade for Azure App Services has been live for a few months now and has many tools that help you troubleshoot apps based on their application stack. In this post, we are going to cover the Collect .NET Profiler Trace option in detail and how you can use it to troubleshoot a slow or a failing ASP.NET based Web App.

Profiler tool helps in collecting an on-demand trace that lets you identify the underlying .NET exceptions, time taken in the various request processing pipeline stages and even lets you drill down into exact methods within the application code that are taking time. It is extremely useful in situations where the problem is happening right now and you want to collect some data to identify the root cause of the issue. Profiling is designed for production scenarios and is based on ETW (Event tracing for Windows) . The analysis component of the profiler uses the TraceEvent library to generate a report that helps you drill down in to the problems in matter of a few minutes. It should be noted that no changes are made to your Web App code or your configuration during the collection or the analysis phase. In fact, the web app is not even restarted as a result of capturing this trace. The captured trace has ETW events emitted by the IIS and the ASP.NET providers along with stack traces captured at the CPU level. You can use this tool to efficiently troubleshoot delays which are relatively small (less than a second too) without impacting the run-time performance of the application. At this point, the profiler works only for ASP.NET web apps only and ASP.NET Core support might come soon.

How to Collect the Trace

To collect the trace, go to the App Service in your Azure PaaS, then go to  Diagnose and Solve Problems  and choose the Collect .NET Profiler Trace option under Diagnostic Tools option and click on Collect Profiler Trace. Unless you have isolated that only a specific instance is failing, it is best to just select all the instances on which your Web App is running.

Add thread report option – With this option enabled, a thread report of all the threads in the process is also collected at the end of the profiler trace. This is useful especially if you are troubleshooting totally hung processes, deadlocks or requests taking more than 60 seconds. This will pause your process for a few seconds until the thread dump is generated. This option is NOT recommended if you are experiencing high CPU on the instance because if the instance is under stress, it might take a long time to even start a new process to collect the thread dumps. Clicking the Collect Profiler Trace will start profiling the Web App and the wizard will show progress of various steps involved. 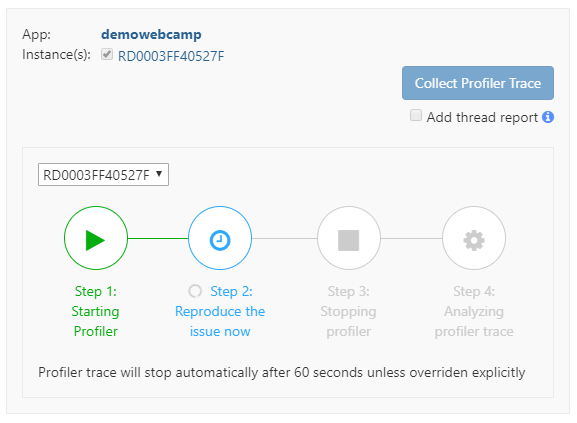